Wind energy represents Spain’s third largest power generation source with a production of 36.2 TWh in 2009, covering 14.5% of the country’s electricity demand. The renewable energy target of Spain for 2020 requires more than 40% of the electricity generation to come from RE, mainly wind energy. 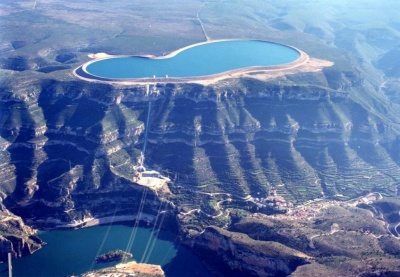 Courtesy of Spanish Ministry of Environment

In a study developed by REE (Spanish TSO), it was pointed out that Spain could not use all the RE energy produced already in 2014 and 2% of this energy will be wasted. (Informe sobre la integración de generación renovable a medio plazo para el periodo 2009-2014 (REE))

In fact, already from 2008 in several occasions wind farms are disconnected during the night due to low demand. REE has also expressed the necessity of maximizing pumped storage as a tool for the TSO to accommodate the wind energy. Luis Atienza (REE president) added that PSH should be separated from generation and be considered as an activity of the electricity system. (Wind energy Development in Spain. Luis Atienza (REE))

In 2006 Spain had 5347 MW of PHS installed (6.6% of the total generation capacity) and is the European country with the highest PHS capacity installed. The proposed PHS developments for the next years are 720 MW. (Techno-economic review of existing and new pumped hydro energy storage plant)

In Spain, there are regulatory barriers that could be considered hindering the investment on new PHS. The TSO is obliged to allow the connection of all RE installations and to buy the energy produced by RE prior to other sources. But TSOs cannot operate energy pumped hydro storage systems that would allow them to balance the energy and make maximum use of the renewable electricity they are obliged to buy.

The project investigated the effect of the regulatory and market framework conditions on the development of new and operation of existing energy storage facilities in Spain and the other target countries. The existing market mechanisms and the regulations were scrutinised identifying possible barriers.

Using the assessment of the energy storage needs in Spain as a basis, a wide consultation process with the key actors, including an on-line questionnaire and a workshop, took place, the results of which fed into an action list including recommendations for improvements. The action list was then promoted within targeted decision makers and stakeholders in order to get the actions adopted to the extent possible. 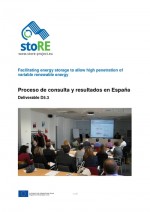 This report investigates the barriers within the Spanish regulatory and market framework to furthering the development of bulk energy storage technologies. It describes the current status of the regulatory and market framework and discusses the barriers to further sustainable energy storage and potential strategies to overcome these. 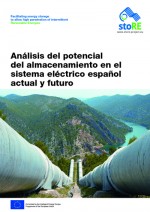 This publication is a summary of our study that assesses the future energy storage needs of Spain. 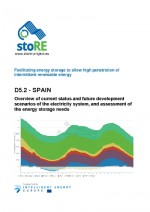 This report deals with the electricity supply system of Spain and aims to provide a clear overview of the energy storage infrastructure needs in order to achieve high penetration of renewable energy in the electricity system. The existing power generation mix and transmission system, and the planned development and reinforcements are considered, along with the national plans for renewable energy development in the next decades up to 2050. The necessity of new energy storage facilities and their feasibility from the energy point of view is investigated with the aid of simulations of electricity system operation characteristics, using specially developed software. The produced qualitative and quantitative results highlight the need and benefits of energy storage in future electricity systems.
The consultation process in Spain (in Spanish) 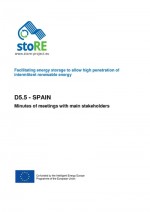 This report collects the summaries of the meetings held with the main Spanish stakeholders along the last six months of project in order to promote the actions list agreed during the Workshop developed in October 2013 and to achieve some commitments from the decision-makers regarding the support of the energy storage in the regulation. 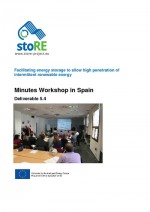 Proceedings of the National Workshop on the market and regulatory framework of energy storage in Spain that took place on 10/10/2013 at CENER's premises in Sarriguren, Navarra (Spain). The challenges and actions to overcome the main barriers that energy storage has to face were discussed with the main stakeholders (utilities, national regulator, technology manufacturers, academia, etc.).