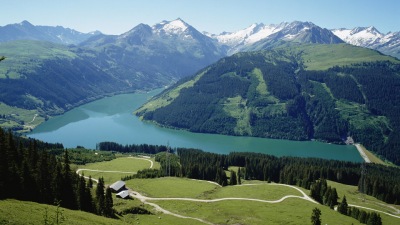 Image courtesy of VERBUND Hydroelectric power supplies approximately 55% of Austrian electricity with an installed capacity of 11,853 MW of which 3,500 MW is PHS. The actual wind installed capacity is around 1000 MW with another 700 MW planned up to 2015. Austria has developed a huge capacity on PHS due to its geographical characteristics with existing storage lakes reducing the building required. According to “APG-Masterplan 2020”, the official 10 years generation and transmission forecast of the Austrian TSO Austrian Power Grid (APG), up to 2020 up to 5,500 MW of new PHS installations are envisaged. The Austrian market is characterized by a high level of public ownership with local governments and municipal councils owning the majority share in most businesses. Austrian policy supports RES-E through feed-in tariffs that are adjusted frequently by law. The responsible authority is obliged to buy the electricity and pay a feed-in tariff.

At present, the future PHS capacity extension plans/needs are not quantified in the corresponding sections of the Austrian electricity law (called “Elektrizitätswirtschafts- und –organisationsgesetz (ElWOG)”). However, the Austrian TSO is obliged to collect the different PHS capacity extension plans from the different market participants in their control zone and has to publish them in the official 10 years “APG-Masterplan” (updated biannually in the future). It is straightforward, that these PHS capacity extensions also trigger further transmission grid extensions to enable better connection and integration of PHS technologies into the Central and Eastern European electricity system.

A significant barrier for PHS capacity expansion and operation, however, is the currently implemented regulatory regime (like transmission grid charges defined and quantified in the corresponding paragraphs of “ElWOG”). Among others, a significant impediment affecting the economics of the PHS technology is a transmission grid charge, having to be paid in both modes: generation and pumping.

The project investigated the effect of the regulatory and market framework conditions on the development of new and operation of existing energy storage facilities in Austria and the other target countries. The existing market mechanisms and the regulations were scrutinised identifying possible barriers.

Using the assessment of the energy storage needs in Austria as a basis, a wide consultation process with the key actors, including an on-line questionnaire and a workshop, took place, the results of which fed into an action list including recommendations for improvements. The action list was then promoted within targeted decision makers and stakeholders in order to get the actions adopted to the extent possible. 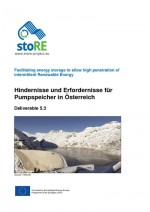 This report investigates the barriers within the regulatory and market framework to furthering the development of bulk energy storage technologies in Austria. It describes the current status of the regulatory and market framework and discusses the barriers to further sustainable energy storage and potential strategies to overcome these. 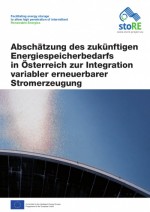 This publication is a summary of our study that assesses the future energy storage needs of Austria. 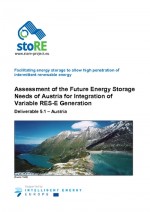 This report deals with the electricity supply system of Austria and aims to provide a clear overview of the energy storage infrastructure needs in order to achieve high penetration of renewable energy in the electricity system. The existing power generation mix and transmission system, and the planned development and reinforcements are considered, along with the national plans for renewable energy development in the next decades up to 2050. The necessity of new energy storage facilities and their feasibility from the energy point of view is investigated with the aid of simulations of electricity system operation characteristics, using specially developed software. The produced qualitative and quantitative results highlight the need and benefits of energy storage in future electricity systems.
The consultation process in Austria (in German) 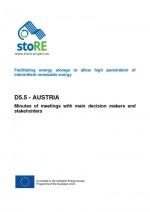 This report summarises the outcomes of the individual meetings with decision makers and stakeholders and their associations held in Austria along the last six months of project in order to promote the actions list agreed during the Workshop developed in October 2013 and to achieve some commitments from the decision-makers regarding the support of energy storage in Austria in the corresponding regulations. 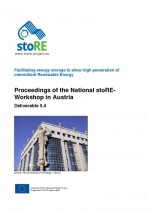 Proceedings of the National Workshop on the market and regulatory framework of energy storage in Austria that took place on 28/10/2013 at the library of the Vienna University of Technology in Vienna, Austria. The workshop addressed several barriers and requirements for the future development of pumped-hydro energy storage plants in Austria and involved representatives from governmental organisations / decision makers, major Austrian utilities, hydropower industry and universities/consultants.