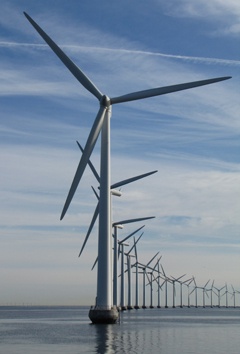 Denmark has the world's biggest share of electricity delivered from fluctuating wind energy productions. At present, the wind power share is above 20% and the plans are in 2030 to raise this share to 50%, making it necessary to consider electricity storage technologies. Over the last eight years West Denmark could not use on average 57% of the wind power it generated and East Denmark an average of 45% and as a result this energy was exported (Wind Energy-The case of Denmark, CEPOS (2009)). Another 50% of the electricity demand is met by CHP.

In contrast to Spain and Germany that have several PHS installations, the hydro potential of Denmark is low and due to the topographic characteristics of Denmark, pumped hydro storage is not relevant. However, there are agreements with Scandinavian countries with high hydro potential and excess of production in Denmark is sold to these countries. On the other site, Denmark has salt caverns suitable for the development of Compressed Air Energy Storage and it has been considered in energy planning models. (Operation Strategies of Compressed Air Energy Storage (CAES) on Electricity Spot Markets with Fluctuating Prices)

The project investigated the effect of the regulatory and market framework conditions on the development of new and operation of existing energy storage facilities in Denmark and the other target countries. The existing market mechanisms and the regulations were scrutinised identifying possible barriers.

Using the assessment of the energy storage needs in Denmark as a basis, a wide consultation process with the key actors, including an on-line questionnaire and a workshop, took place, the results of which fed into an action list including recommendations for improvements. The action list was then promoted within targeted decision makers and stakeholders in order to get the actions adopted to the extent possible. 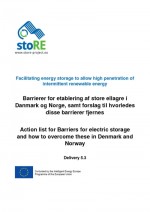 This document provides a list of the most important regulatory and market barriers for Compressed Air Energy Storage (CAES) in Denmark and Pumped Hydro Energy Storage/Pump Back Storage (PHES) in Norway, which has been made through an investigation of the regulatory and market conditions for development of new and operation of existing energy storage facilities in Denmark and Norway. Based on the outcomes of a workshop and a public consultation, the list has been revised and the identified barriers has been analysed and ways to overcome them has been suggested in this report. 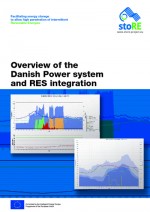 This publication is a summary of our study that assesses the future energy storage needs of Denmark. 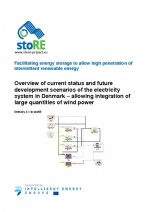 This report deals with the electricity supply system of Denmark and aims to provide a clear overview of the energy storage infrastructure needs in order to achieve high penetration of renewable energy in the electricity system. The existing power generation mix and transmission system, and the planned development and reinforcements are considered, along with the national plans for renewable energy development in the next decades up to 2050. The necessity of new energy storage facilities and their feasibility from the energy point of view is investigated with the aid of simulations of electricity system operation characteristics, using specially developed software. The produced qualitative and quantitative results highlight the need and benefits of energy storage in future electricity systems.
The consultation process in Denmark (in Danish) 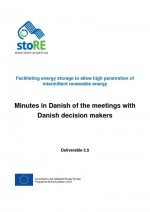 This report summarises the outcomes of the individual meetings with decision makers and stakeholders in Denmark along the last six months of project in order to promote the actions list and achieve some commitments from them regarding the support of energy storage in Denmark. 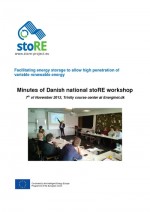 Proceedings of the National Workshop on the market and regulatory framework of energy storage in Denmark that took place on the 7th of November 2013 at Trinity course center (Energinet.dk), Fredericia, Denmark. The workshop involved representatives from the Danish TSO, universities and the industry.