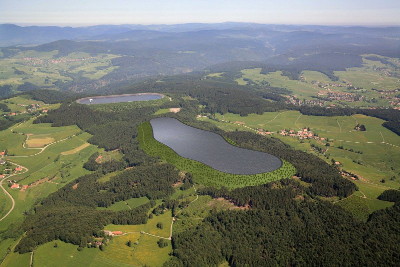 There are already problems though because of the high local penetration of wind energy to the grid. Some federal states have very high per capita percentages of wind power, such as Saxony-Anhalt (52.1%), Mecklenburg-Western Pomerania (45,3%), Schleswig-Holstein (44%) and Brandenburg (42,8%). For some of these power hot spots local solutions for energy storage are required. (Improved grid integration of wind energy systems Dr Schulz, Faculty of Electrical Engineering, Helmut-Schmidt-University (2009))

Moreover in a recent study developed by DENA the need of energy storage as well as other measures as demand management and grid extension in order to reach 30% share of RE in 2030 was highlighted, pointing out that it will lead to considerable reduction in the electricity price. (Analyse der Notwendigkeit des Ausbaus von Pumpspeicherwerken und anderen Stromspeichern zur Integration der erneuerbaren Energien.)

Germany has the largest number of PHS plants with 23 operational plants and is the second European country after Spain in installed capacity with 7 GW. The biggest PHS Goldisthal can deliver a power of 1060 MW over 8 hours. The installation of new big conventional PHS is constrained in Germany by the limited natural potential. Schluchseewerk AG is planing a new PHES of 1400 MW rated power and a capacity of 13GWh in Atdorf which will start operation in 2019. The picture Hornbergbecken 2 shows the existing upper lake (Hornbergbecken) and the plans for the new one.Yet, future storage solutions might be PHS in artificial geographical structures like remaining quarries of open-cast mining structures or chalkstone quarries. Compressed air energy storage (CAES) could also be a future storage option. However, only one CAES with a power of 290 MW is installed in Germany so far. German regulation facilitates energy storage installation with a new law (EnWG §118) that exempts new energy storage facilities installed before 2019 of paying connection taxes for ten years. (Analyse der Notwendigkeit des Ausbaus von Pumpspeicherwerken und anderen Stromspeichern zur Integration der erneuerbaren Energien.)

Grid Study II (https://www.dena.de/en/topics/energy-systems/projects/projekt/grid-study-ii/) is developing a long-term plan for the integration of renewable energies, and particularly wind energy, into the German power grid. It focuses on technical and organisational solutions and has found that for reaching 30% share of renewable, energy storage will be necessary to compensate the uncertainty and variability of energy supply.

The project investigated the effect of the regulatory and market framework conditions on the development of new and operation of existing energy storage facilities in Germany and the other target countries. The existing market mechanisms and the regulations were scrutinised identifying possible barriers.

Using the assessment of the energy storage needs in Germany as a basis, a wide consultation process with the key actors, including an on-line questionnaire and a workshop, took place, the results of which fed into an action list including recommendations for improvements. The action list was then promoted within targeted decision makers and stakeholders in order to get the actions adopted to the extent possible. 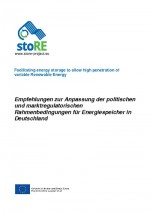 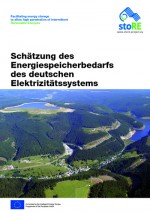 This publication is a summary of our study that assesses the future energy storage needs of Germany. 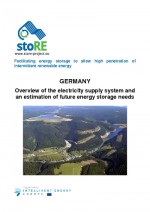 This report deals with the electricity supply system of Germany and aims to provide a clear overview of the energy storage infrastructure needs in order to achieve high penetration of renewable energy in the electricity system. The existing power generation mix and transmission system, and the planned development and reinforcements are considered, along with the national plans for renewable energy development in the next decades up to 2050. The necessity of new energy storage facilities and their feasibility from the energy point of view is investigated with the aid of simulations of electricity system operation characteristics, using specially developed software. The produced qualitative and quantitative results highlight the need and benefits of energy storage in future electricity systems.
The consultation process in Germany (in German) 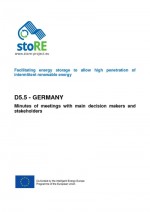 This report summarises the outcomes of the individual meetings with decision makers and stakeholders and their associations held in Germany along the last six months of the project in order to promote the actions list agreed during the Workshop developed in September 2013 and to achieve some commitments from the decision-makers regarding the support of energy storage in Germany in the corresponding regulations. 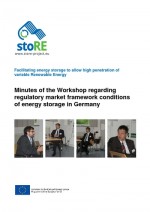 Proceedings of the Workshop on the market and regulatory framework of energy storage in Germany that took place during the conference “sustainable energy supply and integration of storage (NEIS 2013)” at the Helmut Schmidt University in Hamburg.