Ireland has one of the best wind resources in Europe. While the current penetration of wind power is small compared to other systems, the Irish government has set a target of 40% RES-E by 2020. If this target is met, at least 33% of RES-E is likely to come from wind, with the remainder mainly from biomass and hydro. 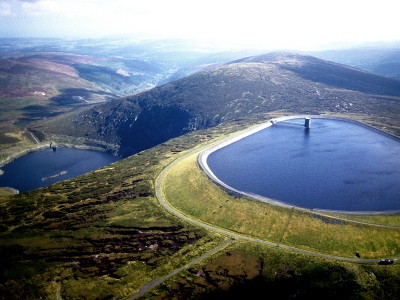 It is therefore likely that wind generation will frequently exceed the electricity demand in Ireland under this scenario. Already an ambitious grid reinforcement plan will see €4 billion investment to 2025, including additional interconnection capacity to Northern Ireland and a 500 MW HVDC interconnector to Wales. However, it is acknowledged that this plan should be combined with demand side management, peaking plant and storage to fully integrate the proposed wind capacity while maintaining system security and minimising the risk of wind curtailment.

There is one 290 MW pumped hydro storage plant constructed in the 1970s. Grid connection offers have been made for two new 70 MW pumped storage facilities. After detailed analysis of existing geologic and drilling data, it has been reported that there is potential for CAES development. Long waiting times for grid connection offers and lack of convergence of the grid connection and planning permission processes remain concerns for all large-scale energy developments in Ireland. A new legal instrument, the Planning and Development (Strategic Infrastructure) Act, was introduced in 2006, with the aim of streamlining the approval process for new transmission lines.

A single electricity market operates in the entire island of Ireland (comprising the jurisdictions of the Republic of Ireland and Northern Ireland). All electricity is traded in a single pool, and generators may participate in the market as ‘price makers’ or ‘price takers’. Variable renewable generators generally participate as price takers in the market and receive priority dispatch. However, the renewable energy feed-in tariff (REFIT) support system provides a guaranteed minimum unit price, regardless of the current market price. The market also rewards the provision of capacity and ancillary services such as fast-acting reserve by generators. Storage operates slightly differently to conventional generators in the market, but storage operators may earn revenue through a combination of energy payment arbitrage based on price differences during charging and discharging the store, capacity payments and ancillary services payments (Study of electricity storage technologies and their potential to address wind energy intermittency in Ireland, UCC Sustainable Energy Research Group).

The large potential for expansion of wind generation, combined with the isolated nature of Ireland’s grid, means that in the Irish case, storage merits particular attention as a means of integrating not only wind but future variable renewable sources such as wave and tidal energy.

The project investigated the effect of the regulatory and market framework conditions on the development of new and operation of existing energy storage facilities in Ireland and the other target countries. The existing market mechanisms and the regulations were scrutinised identifying possible barriers.

Using the assessment of the energy storage needs in Ireland as a basis, a wide consultation process with the key actors, including an on-line questionnaire and a workshop, took place, the results of which fed into an action list including recommendations for improvements. The action list was then promoted within targeted decision makers and stakeholders in order to get the actions adopted to the extent possible. 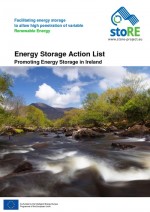 This report investigates the barriers within the Irish regulatory and market framework to furthering the development of bulk energy storage technologies (EST). It is structured into two main sections; the first section is on the current status of the regulatory and market framework; the second will discuss the barriers to further sustainable energy storage and potential strategies to overcome these. 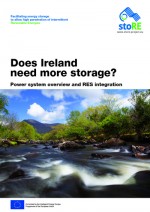 This publication is a summary of our study that assesses the future energy storage needs of Ireland. 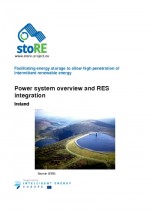 This report deals with the electricity supply system of Ireland and aims to provide a clear overview of the energy storage infrastructure needs in order to achieve high penetration of renewable energy in the electricity system. The existing power generation mix and transmission system, and the planned development and reinforcements are considered, along with the national plans for renewable energy development in the next decades up to 2050. The necessity of new energy storage facilities and their feasibility from the energy point of view is investigated with the aid of simulations of electricity system operation characteristics, using specially developed software. The produced qualitative and quantitative results highlight the need and benefits of energy storage in future electricity systems.
The consultation process in Ireland 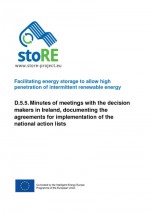 This report summarises the outcomes of the individual meetings with decision makers and stakeholders in Ireland in order to promote the actions list agreed during the  Irish National Workshop, held in the Galway Bay Hotel, Galway, Ireland on the 2nd of October 2013 and to achieve some commitments from the decision-makers regarding the support of energy storage in Ireland. 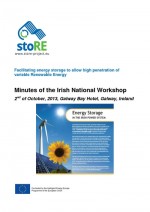 Proceedings of the Irish National Workshop, held in the Galway Bay Hotel, Galway, Ireland on the 2nd of October 2013 with representatives from energy organisations, utilities, suppliers and the academia.