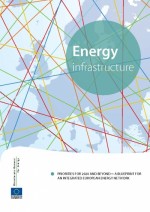 In November 2010, an EC communication was adopted on energy infrastructure priorities for 2020 and beyond - A Blueprint for an integrated European energy network, COM(2010) 677 outlining a vision of what is needed for making our networks efficient. On the 19th of October 2011, the European Commission adopted two relevant proposals for Regulations, which together comprise the energy infrastructure package:

The "Guidelines for trans-European energy infrastructure" proposal aims at ensuring that strategic energy networks and storage facilities are completed by 2020. To this end, the Commission has identified 12 priority corridors and areas covering electricity, gas, oil and carbon dioxide transport networks. It proposes a regime of "common interest" for projects contributing to implementing these priorities and having obtained this label. In general storage has a prominent position in the proposed regulation as it is always mentioned together with transmission. However, in Article 14 (1) regarding Incentives and 15 (2) regarding Financial Assistance the most mature storage technology of pumped-hydro is specifically excluded. 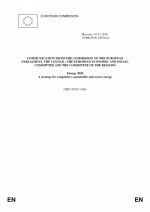 The "Energy 2020" Communication (COM(2010) 639) identifies the energy priorities for the period up to 2020, i.e. to reduce energy consumption, implement the internal market, develop infrastructure, improve technology, protect consumers and reinforce the external dimension of energy policy.

Regarding storage, under priority number 4, the second proposed action foresees ambitious storage projects for bringing Europe to the forefront regarding relevant technology development: “Re-establishing Europe’s leadership on electricity storage (both large-scale and for vehicles). Ambitious projects will be developed in the fields of hydro capacity, compressed air storage, battery storage, and other innovative storage technologies such as hydrogen. These will prepare the electricity grid at all voltage levels for the massive uptake of small-scale decentralised and large-scale centralised renewable electricity”. 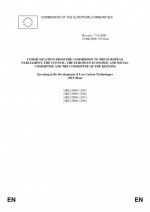 The European Strategic Energy Technology Plan’s (SET-Plan) objective as expressed in the COM(2009) 519 and the staff working document SEC(2009) 1295 is to “bring together industry, the research community, the Member States and the Commission in risk-sharing, public-private partnerships aiming at the rapid development of key energy technologies at the European level”.

There are 8 European Industrial Initiatives included in the SET-Plan but there is no specific initiative related to electricity storage technologies. Nonetheless, storage is mentioned in the documents relevant to the European Electricity Grid initiative, the Solar Initiative and the Wind Power Initiative.

The European Commission invites the Agency for the Cooperation of Energy Regulators (ACER) to develop framework guidelines, which set out general principles for the rules that regulate, who may use the electricity networks to transport energy across borders and under which conditions. Network codes are then drafted by ENTSO-E in coherence with the principles that ACER sets out in the framework guidelines which can be found here.

As part of the EU third energy package, the institutional framework was also affected. The Agency for the Cooperation of Energy Regulators (ACER) and the European Network of Transmission System Operators for Electricity (ENTSO-E) were established. ACER was mandated according to Regulation (EC) No 713/2009 to propose Framework Guidelines, based on which, ENTSO-E develops legally binding network codes (Regulation (EC) No 714/2009) for cross-border network and market integration issues, without prejudice to the Member States’ right to establish national network codes which do not affect cross-border trade.

The process of developing a single energy market for Europe already started in 1996 with the Directive 96/92/EC1 which defined common rules for the creation of an internal market for electricity. In 2003 Directive 2003/54/EC was adopted in order to deal with shortcoming and to improve the functioning of the market. Directive 2009/72/EC was adopted in order to further open and integrate the energy market. This Directive is also referred to as the Electricity Directive and is part of the “EU third energy package”.

The Directive 2009/28/EC of 23 April 2009 (amending and subsequently repealing Directives 2001/77/EC and 2003/30/EC) sets ambitious and binding targets for all Member States, such that the EU will reach a 20% share of energy from renewable sources by 2020. It also improves the legal framework for promoting renewable electricity, requires national action plans that establish pathways for the development of renewable energy sources and creates cooperation mechanisms to help achieve the targets cost effectively. The Directive foresees that the Member States will develop national renewable energy action plans (NREAP), planning the development up to 2020. Indeed all 27 Member States have submitted these plans within 2010.

Regarding storage, first the Directive clarifies that “electricity produced in pumped storage units from water that has previously been pumped uphill should not be considered to be electricity produced from renewable energy sources”, something that was already clear from the 2001 Renewable Energy Directive. The Directive also recognises the need for supporting electricity storage: “There is a need to support the integration of energy from renewable sources into the transmission and distribution grid and the use of energy storage systems for integrated intermittent production of energy from renewable sources.”